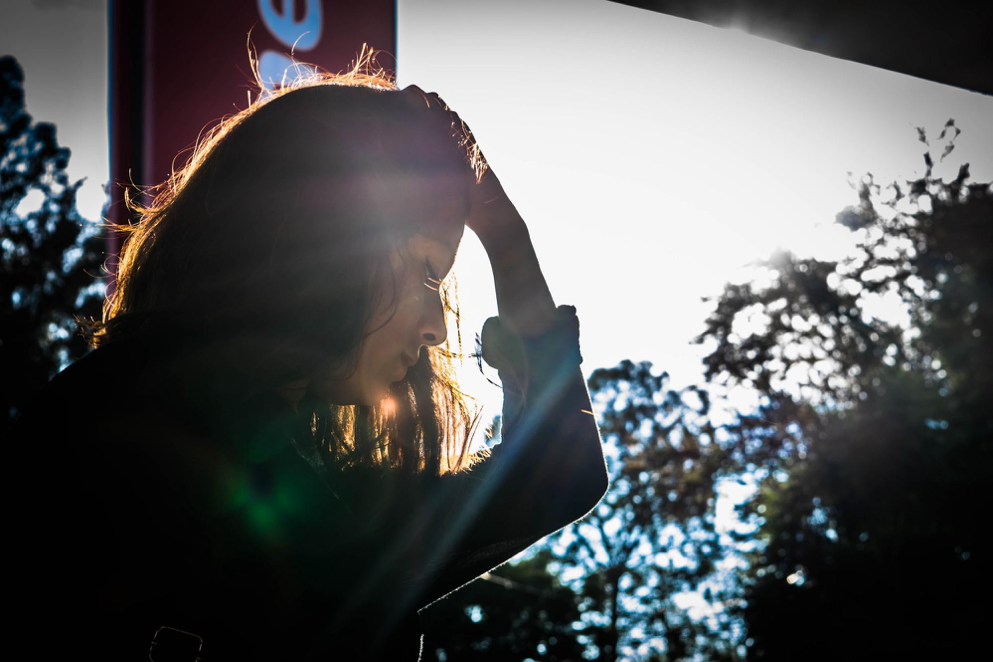 For me, It all started in 7th grade. The year seemed promising. I was in the popular clique, with tons of friends — both boys and girls. Our group of girls behaved in the typical ‘’mean girls’’ manor as depicted in the media. A few months into the school year everything changed. It took one act of jealousy by one of my mean girlfriends and instantly I became an outcast. As dramatic as this may sound, I had no concept that this bullying experience would have devastating effects on my psychological and physical well being.

The bullying came in the form of sexual harassment and body shaming. My body was growing and changing like it was supposed to during this phase in puberty. Unfortunately, I experienced fat shaming on a daily basis to and from school while riding the bus. They shouted horrible insults at me — and everyday when I exited the bus, the boys would take a turn pinching my rear end and commenting on how big and wide it was.

The onset of eating disorders are especially prevalent in children and adolescents who have been victims of body shaming. Weight stigma poses a significant threat to psychological and physical health. In fact, in 2017 the World Health Organization has recognized weight stigma as a public health concern.

Weight based teasing can predict weight gain, binge eating disorder, and extreme weight control measures. This may develop an increase in distorted thinking with extreme fear of gaining weight or becoming “fat” and consequently, development of an unhealthy relationship with food.

Around this time, I started noticing digestion issues. I reached out to a pediatric gastroenterologist. At my initial examination, he was overwhelmed when he determined how F.O.S or “full of stool” I was. I was instructed to start a clear liquid diet and bowel cleanse for 48 hours. After that, I was constantly having GI testing (endoscopy, colonoscopy, barium enemas, etc). I was diagnosed with lactose intolerance, IBS with constipation, and duodenal ulcers.

An often overlooked contributor to IBS is the effect of negative emotional experiences and trauma. For young children, many situations would fit the criteria for trauma. Any type of abuse, whether physical, emotional or sexual, is severely traumatizing for children. Because IBS is a condition that involves both the mind and the body, any effective IBS treatment also needs to address both the mind and the body.

Researchers have discovered that a lesser known nervous system in our guts, a “second brain”, communicates with the brain in our head. Together, “our two brains” play a key role in certain diseases in our bodies and overall health. We know that patients with gastrointestinal problems often experience anxiety and stress because of their condition.

The close relationship between your brain and digestive system and the network of nerves connected to your gut can trigger problems when you’re under stress — in particular from being bullied. Those who already suffer from IBS can notice the biggest problems, with symptoms such as pain and bloating becoming worse.

There is scientific proof that dieting and restrictive eating can be detrimental to your self-esteem and has a higher rate of illness and death than competent, intuitive eating — regardless of weight or BMI. Dieting can be a significant trigger for eating disorders which can lead to disorders of the gut-brain interaction, including Irritable Bowel Syndrome and Functional Dyspepsia.

Of course, it’s very easy to fall victim of the internet and the saturation of IBS diet information and suggested food lists. One thing I learned through my IBS journey, is that specified food rules do not fit everyone. Nutrition should be individualized and not created from a list of yes’s and no’s.

I would hold it together all day at school and would come home and cry to my parents. I did not want the bullies to know that they were breaking me. For some reason it was important for me to not let them win.

My parents were heartsick about the abuse I was experiencing. I could see how it was affecting them and that also hurt me. They spoke to the school principal and they even made an effort to engage the parents of my bullies. All attempts were unsuccessful. The parents of my bullies were unwilling to correct their children. The principal was also worthless, as he suggested I switch to another school. This was not an option. I just did not want the bullies to win.

The more I was teased and ridiculed about my changing body, the more I started to loathe my body. I would complain to my mother about my weight and how I was dissatisfied with my body. My mother suggested we attend Weight Watchers. She had been a member and thought it was a good idea for us to attend together. I loved this idea and was so excited to start this diet and change my body right away! I remember the excitement of learning all the food groups and the points associated with the foods.

This was the perfect entryway to the diet culture.

I recall being a slave to counting my points and being so careful not to go over the point limit! I dreaded eating out or attending parties. It was overwhelming not knowing how many points the foods were, or fearing that I would eat more than planned. The guilt and shame would take over and the weight checks added to the misery. So much depended upon that number! It would make or break my mood, or the outcome of the day or week until the next weigh-in.

My parents were always physically active individuals. They encouraged me to exercise in addition to participating in Weight Watchers. I gradually started adding some movement to my day. I would walk or run on the treadmill or use a stepper a few times a week. I did seem to feel better physically and emotionally after exercise and would continue to incorporate movement into my schedule. I didn’t take full advantage of the connection of movement and my body. I was terribly restricted and kept everything inside.

Consider movement such as walking, running, cycling, or yoga. Exercise is beneficial for enhancing your mood. Exercise can stimulate various brain chemicals that may leave you feeling happier and more relaxed. You may feel better about yourself when you exercise consistently, which can boost your confidence and self esteem.

Dieting, Gastro-Intestinal Health and Self Image

As I continued to diet, digestive issues followed me through high school and college. It never occurred to me that the psychological stress from the bullying and dieting heavily impacted my gut. No matter what my progress was with my ‘’weight loss’’ journey, I continued to see myself as the same ‘’chubby girl’’ that was fat shamed day after day on the school bus.

I continued to work with the same GI doctor when I was in college. The problem seemed to become progressively worse. I was encouraged to participate in a study for a new medication for chronic constipation. The study involved the new medication and a poop journal. I had to take the pill daily and journal my poops. If I had no BM in 3 days, that meant I had to take Dulcolax. UGH. This is probably when things became more problematic for my digestive tract. Coincidentally, I started my college path studying Physical Therapy, but became intrigued with nutrition and dietetics. I was very curious about food and the effects of nutrients on the human body.

In 2006, I started working as a Registered Dietitian at Western Psychiatric Institute and Clinic of UPMC. I was responsible for covering the geriatric unit, and all tube feeding consults. One day, I was covering for another RD on the eating disorder unit. I had no prior experience working with eating disorders as my dietetics background was in geriatrics, rehabilitation, and weight management.

Covering the Eating Disorder Unit, UPMC Center for Eating Disorders changed my life. I realized how much I enjoyed and could personally relate to this population. I loved the cohesiveness of the treatment team and how every clinician was equally important. After my exposure to the ED unit, I truly found my passion within dietetics.

My boss at the time noticed the rapport and success I had with the patients. My new RD role developed into covering the inpatient and partial hospitalization levels of care on the eating disorder unit. When my patients’ experienced GI issues such as constipation, bloating, distention, and poor body image, I could truly empathize and relate to their discomfort.

My final diet was the the South Beach diet.

I remember meeting with a patient on the Eating Disorder floor to increase her meal plan. She was absolutely terrified of eating carbohydrates. I had to convince her that carbs were not the devil and that they were essential for our brain function and providing our bodies with much needed energy. After having a successful interaction with my patient, I couldn’t help feeling like a complete hypocrite. I was heading to lunch to eat my turkey and cheese salad I brought in from home, another carb free, crappy meal. This was the aha moment for me.

I decided that any dieting and disordered eating needed to disappear. I made up my mind that I needed to make some changes in my relationship with food right away! I started incorporating grains with my meals and snacks. I didn’t realize I was walking around ‘’hangry’’ all the time because I never felt satisfied after I ate. I realized I was constantly thinking about food and contemplating the next time I would allow myself to eat again. Once I decided to give myself the permission and freedom to eat, I noticed how much more satisfying my meals had become! Over time, I was able to heal my relationship with food and my body.

In 2010 I gave birth to my daughter. I promote a healthy environment for her because I want her to grow up with a healthy relationship with food. I do not want her to become another victim to the diet culture.

Don’t consider the diet culture. The reality is that diets don’t work and are unsustainable.

This is not just my belief, but evidenced-based in hundreds of research studies!

To this day I still struggle on and off with constipation. I have to be mindful of adequate fluids and balancing fiber appropriately. I learned the hard way that “more is not always merrier” when it comes to fiber. I also recognize that all bodies are different, especially when it comes to digestion.

My advice for anybody that may be a victim of bullying, please don’t allow all of the sadness, anger and loneliness to take over. You may think you can handle it all by yourself, but unprocessed emotions, things you have not allowed yourself to process, will come back in one form or another. Unprocessed emotions may come back as anxiety, depression, panic attacks, physical pain, or chronic disease. If you do not have supportive people in your life, or the people in your life have not been able to help you, please seek professional counseling so that you can begin to feel better.

There are a wealth of professionals and organizations that are able to help. I would also suggest working with providers (dietitians, therapists, and physicians) that have an anti-diet philosophy and practice a weight inclusive approach. This approach would have saved me from body image issues, dieting, and lifelong digestive issues.

Megan Neiman is a loving mother, daughter, wife and Registered Dietitian. She works out of the offices of Relationship Resolutions in Pittsburgh, Pa where she encourages her patients to practice food freedom and food neutrality while promoting exercise and movement as a form of self-care. Go check out her website and then follow her on Twitter @megneiman and Instagram @megneiman_rd.