Xicana Women from California and The Founder of Nalgona Positivity Pride

Gloria Lucas from Nalgona Positivity Pride will be discussing her personal journey with recovery and the story behind the making of one of the leading organizations focusing on eating disorders awareness in communities of color. Lastly, Lucas will go over ways in which loved ones can be more supportive and sensitive to those struggling with an eating disorder. 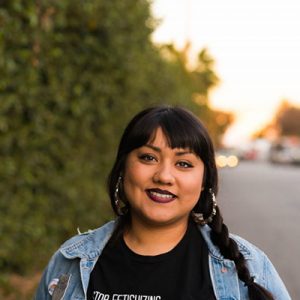 Gloria Lucas is a Xicana women from California and the founder of Nalgona Positivity Pride. Straight from the Inland Empire, the DIY punk community in Riverside taught her to organize and since the age of 18 she has helped create Ladyfest IE, IE Riot Grrrls, and Women of Color for Decolonization. Gloria has a background in sexual health education, HIV/AIDS services, and trauma & substance abuse services for women and transgender folks. In 2014, she founded Nalgona Positivity Pride from years of dealing with the lack of women of color representation in the eating disorder awareness community. Like the women of color that came before, she creates spaces for marginalized folks to support each other and heal from the trauma of colonialism, eurocentric beauty ideals, and disordered eating in communities of color. Gloria’s work has been featured at the Huffington Post, MiTú , Bitch Magazine, and The Body is not an Apology. She lives in Los Angeles with her boyfriend and their cats, Pepita and Mister Orange.

Purchase this video series and receive The Helping Hands E-book: full of over 30 pages of checklists, tools and resources.